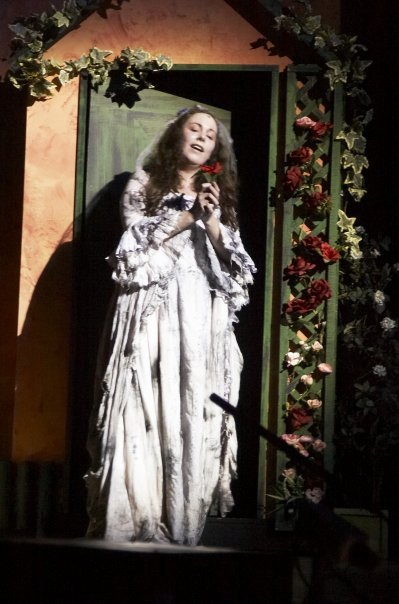 I was born and raised on the Isle of Man and began singing and acting at a young age at Peel Clothworkers School.  A favourite role from the time was being cast as the 'slave girl who was chopped in two'  for the School Assembly which indulged my early tendencies towards the dramatic.   Following this, I was pulled out of line in the school choir and forced to make my debut at the Manx Music Festival (the Guild) where I sang, with some success, 'Mrs Jenny Wren' in the 6 and under 9 girls' solo placing joint 4th in a class of 89 (pity the poor mothers!).  Luckily, the experience left me not too scarred to try again the folloiwng year but, alas, further Guild success was a long time in coming.

Much later, I went on to study Music and Drama, specialising in performance in both subjects, and graduated with a degree from the University of Liverpool.  Then, deciding that it was far too soon to get a proper job, I continued my studies at the University of Durham where I somehow gained an MA and PhD from the Department of Music.  I use the word 'somehow' because all the while I spent far more time perfoming in productions and concerts than I ever did on my studies.

I began teaching whilst an undergraduate and this is something which I greatly enjoy and have continued to do ever since.  Whilst it may sound trite to say, I genuinely find that I learn as much from my students as (I hope) they learn from me and I think that teaching others has also certainly assisted in developing my own skills as performer.

I returned to the Isle of Man a few years ago where we are blessed with a rich and vibrant artistic life.  It is difficult to think of anywhere else where both the quality and quantity of opportunities available to performers exists in quite the same way.  Since being here I have been lucky to be able to build up my teaching practice, whilst continuing to work as a performer both on the Island and further afield.

I currently study singing with  Alison Wells and am a member of the Association of Teachers of Singing, the ISM, and the British Voice Association.

For a full CV please use the 'contact me'' button on the Home page.